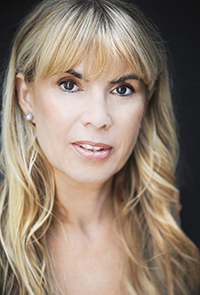 Veteran filmmaker Julia Verdin is a multi-hyphenate – she is known as an accomplished producer, award-winning Director and has written a number of screenplays. Having been in the film business for 30 years, Julia has established herself as one of Hollywood’s leading independent producers, with over 36 critically acclaimed feature films produced to date. She founded and has been running Rough Diamond Productions since 1995.

Julia’s films have been selected for many major film festivals including Sundance, Toronto, Venice, AFI, Raindance, Vancouver International, and London.

Julia’s producing background enables her to stay on budget and schedule while bringing out the best creative results.

Julia received the La Femme 2015 Executive Achievement Award and was honored for her work in film and supporting female filmmakers. She served as a judge at the 2015 LA Shorts Festival, speaks regularly on film festival panels and supports up and coming filmmakers. She served on the board of BAFTA LA for ten years and chaired the film committee and was instrumental in starting up the BAFTA newcomer program and encouraging mentorship of up-and-coming filmmakers.

Julia founded and serves on the board of directors of Artists For Change, a 501c non-profit with a mission of raising awareness on key social issues through film and media.

Julia is passionate about raising awareness on critical social issues through the powerful medium of film and encourages filmmakers to think about making content that contributes to a better world. She is an inspiring public speaker when raising awareness on issues or encouraging people in tapping into their talents, reaching their full potential, and using their voices for good.

Julia Verdin recently made her mark as a writer and director and has just completed directing her fifth film. She is also known for her social impact work in film. Her former acting background has given her the tools as a director to support her actors and bring out amazing performances, and her producing background enables her to stay on budget while bringing out the best creative results.

Julia’s directorial debut, Lost Girls, starring Bar Paly, Marisol Nichols, and Jamie Harris did well on the festival circuit and won several awards including Best Social Impact Film at The Culver City Film festival. The film has also been broadcast as part of an educational program on sex trafficking of minors and has been screened by organizations and communities while being currently in distribution.

Her first feature film that she directed, wrote, and produced, Angie: Lost Girls, had a limited theatrical release in December 2020 at a drive-in due to Covid-19 and distributed by Freestyle in the U.S. and Jinga Films worldwide. Set around the world of child sex trafficking again, this time focusing on a victim’s difficulty re-integrating with her family, re-finding her self-worth whilst combating ongoing threats to herself and loved ones from traffickers. The film stars Olivia d’Abo, Dylan Sprayberry, Anthony Montgomery, Randall Batinkoff, Jane Widdop, M.C. Lyte and Amin Joseph. It was picked up by Lifetime in Spring 2022 and had a Saturday night premiere, engaging millions of viewers.

Other directing work includes 3 short films in partnership with non-profit Kids in The Spotlight. Brown, The Inheritance, and Scripted are stories Julia directed that were written by and acted in by foster youth. Brown screened at Paramount Studios in November 2019 and at several film festivals. The Inheritance premiered at the Orpheum Theater in November 2021. Scripted premiered November 2022 at the Regal LA Live.

Julia is currently in pre-production on No Address, a story about a group of homeless people bonding together as a family, struggling to survive the streets while fending off a harassing gang, an unforgiving community, and the local authorities in hopes of finding their humanity again.
Julia also is set to direct Amy and Angel, an inspiring story about a deaf teenager who against all odds, dances her way to stardom with a rescued dog.
Julia transitioned to directing from a successful producing career. She has produced 36 films, including theatrical releases “Merchant of Venice” with Al Pacino and Jeremy Irons, “Stander” with Thomas Jane and Deborah Unger, and “2 Jacks” with Sienna Miller, Danny and Jack Huston and Jacqueline Bisset, which played in many major film festivals including Sundance, Toronto, Venice, AFI, Montreal and London film festivals.
As well as holding an MA in Film, she has also trained as a director with Joan Scheckel, Judith Weston, John Osborne, and John Penney. Julia holds both US and UK passports and is based in LA.

Julia Verdin is a top film consultant in the industry.

Julia Verdin has written 4 full length feature award-winning screenplays and 1 short film, 3 of which have been made and achieved success and critical acclaim, the fourth starts principal photography on 30th Jan 2023 and the fifth has been optioned and scheduled to go into production fall 2023 and Julia is currently working on two new screenplays.

Julia is passionate about making social-issue-driven films as a writer and using the power of film to shed light on important social and humanitarian issues.

Julia is also known as a leading educator in film: her book Success in Film, a guide to developing, funding, producing, and marketing indie films is on many college syllabuses around the world and has helped many filmmakers. She tutors Film MA students and provides consultation for many writers on their scripts. She is also regularly hired by production companies as a script consultant/script fixer over the years and has a knack of identifying what is lacking in a screenplay and fixes needed to make it great.

What others are saying…

"I have known Julia Verdin for more than 12 years and I worked with her on several films when I was head of production at Promark Entertainment. I hired her as a producer on several international productions because of her knowledge of international distribution, physical production and talent relationships. She has great story instincts and knows how to re shape a script to make it talent and production friendly.

She also has great on set producing skills and all the films she produced were done on time and on budget. She has great talent packaging skills and put together the casts for several of our films as well as producing them. She was great at getting us top name talent and also finding really interesting choices for all the supporting roles. She is very professional and experienced at what she does and I would highly recommend her both as a producer and for casting purposes."

"Julia is one of the best producer I have ever worked with. She really understands a director’s needs and always seems to solve problems before they happen. She keeps a wonderfully calm, focused set and has a great eye for casting, always delivering me wonderful actors for every role. It helps that she has the best talent connections of anyone I know in the business. Julia will always be my number one choice of producers to work with."

"I worked with Julia Verdin recently on TWO JACKS. We had a wonderful working experience and she worked tirelessly as a producer to get the best for every aspect of the film. She pulled together miracles on the smallish budget we had. As a director I was given all the tools I needed to make a great film and felt backed up by her every step of the way. She fights to get the best of everything.

She also has great taste in actors – we did not use a casting director and cast the film ourselves. She also got me great Heads of Departments who were really creative and good. She also creates a really good energy working environment for all concerned and it was a really good experience all round. I was really pleased with the way the film turned out."

"Producer Julia Verdin and I embarked on the most ambitious and exciting feature film of my career thus far, shooting STANDER in the cities and townships of South Africa. The film re-created dozens of notorious bank robberies, as well as riots with thousands of extras and military convoys.

Julia had the ability to keep our production calm, focused and smooth running, even under difficult and challenging conditions. She always maintained a fantastic attitude, and has terrific people skills. As a director, I felt incredibly well supported, especially with her level of perseverance and solution-oriented way of thinking. Working with producer Julia Verdin meant I had an invaluable ally and creative partner.

In addition, Julia through her management background was instrumental in putting together our cast. She has terrific personal contacts in the acting community, and great taste to know who is right."

"Julia has consulted with me on a number of occasions and I have always been more than happy with the results. I have made several feature films and always begin the process by bringing Julia in at the beginning to give story notes and casting suggestions.

Her story ideas are insightful and her understanding of casting is amazing. The lists of actors she provides me with are fantastic.

When I am in the editing process I turn to Julia again because I have to start the ‘selling phase.’ Julia knows the players out there and who is looking for what kind of film. My investors and I, again, are always happy with the results.

Julia has a wealth of knowledge and gets the job done quickly and perfectly. I couldn’t recommend her more. She really knows the lay of the land."

"Julia is one of the most wonderful producers I have worked with. She did an amazing job for us with ‘STANDER’ and as a result I have hired her on a number of other films for the company. I also invited her to join our board of directors on which she served a 3-year term and always had great insights and suggestions. Julia has also consulted for us on a number of projects and is great with script notes and casting ideas and has really good production knowledge and skills. Most importantly, she is passionate, smart, honest and reliable and gets things done quickly and efficiently. I highly recommend her."

"Julia has been an excellent partner in polishing my script for ‘An Invisible Army.’ Her insights into story and character are strong and were most helpful in sharpening the script. Not only was working together a truly creative experience, but has proved to be successful as we now have placed the project with a financing and production company and plan to be shooting the film next spring.

I am most grateful for her passion and commitment to the project and highly recommend her to anyone who wants to take their script out to the market place."