THE HOLLYWOOD TIMES: Director Julia Verdin’s Film about Sex Trafficking of Minors in LA is Timely in Light of the Big Busts

By Julia VerdinSeptember 2, 2016September 13th, 2016Press, Reviews
No Comments
THE HOLLYWOOD TIMES: Director Julia Verdin’s Film about Sex Trafficking of Minors in LA is Timely in Light of the Big Busts 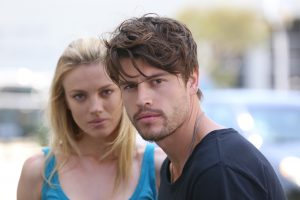 Screening this weekend at the prestigious LA Shorts Festival is director Julia Verdin’s debut short film LOST GIRLS.
The film is about sex trafficking of minors in Los Angeles and features a wonderful and textured performance from the stunning Bar Paly as Kara the woman who recruits the innocent Marisol, played by newcomer Cristina Cibrian. Siena Goines performance as a mother desperately trying to find her daughter is also deeply moving.  Well known TV actress and activist Marisol Nichols is chilling as Romina the evil trafficker.  This role was a far call for Marisol as in actuality she fights passionately against sex trafficking and since being involved in the film has set up her own charity Freedom for Slavery.  Stellar performances from all the supporting cast including the wonderful Jamie Harris and even the talented Rena Owen pops up in a small role of a cop. “I was very lucky in that I was able to get great actors to be part of this” says Julia.  “Rena Owen and Jamie Harris both heard about what I was doing and even though the roles were small wanted to be a part of the film to help raise awareness and support what I was trying to do.”
Verdin tells us that she was inspired to make the film after volunteering at Children of the Night a shelter for runaway girls.  “I started hearing these tragic stories about some of the things these 12-15 year old girls had been through and was shocked to my core.  As I started to do research on the subject, I heard more and more heart breaking stories, the script is based on a variety of them.   I decided to set the story in LA and did further research by talking to various organizations and experts working in the field including Kim Biddle of Saving Innocence and Lt. Andre Dawson, who supervises the Los Angeles Metropolitan Human Trafficking force and the FBI Innocence Lost Task Force.
People often think of sex trafficking as a third world problem but in reality is a huge issue in the US.  Just in the last couple of weeks in LA several major busts have been made and a number of teenage girls rescued.
In light of all the recent arrests many of the organizations are in desperate need of funding to provide shelter and counseling for the young rescued victims.  Many of them don’t have homes to go to.  There are many ways the public can help – financial donations being the most obvious help needed but for those who are not in a position to help financially there are many other ways.  Female hygiene products and new clothing is needed and they also need volunteers.  People can also help by signing bills that will help stop trafficking.
We worked closely on the film with a great non profit group Saving Innocence, who work very closely with the police and are very much on the ground in this area.  I really hope that people who see my film will be inspired to get involved and help them and some of the other organizations working in this area in whatever ways they can.”
The film itself is beautifully directed.  Verdin handles the material delicately and in contrast to many of the other films made on this subject, it is not gratuitous or exploitive choosing instead to rely on the actors’ performances and cleverly provoking the audience’s’ imagination to convey the horror of their circumstance.  Peter Holland’s cinematography is stunning and the filmmakers very successfully convey the powerful message of the film.   The film cleverly puts across the various perspectives of the problem and it was fascinating in the way that it also showed the cycle of abuse through Kara’s story.   People often say that film is a powerful medium to provoke awareness, cause debate and stir people to action and this film successfully does that.
Julia is currently preparing to make a feature film version of the short which I have no doubt will be equally impactful.

The Guardian: Film to be made about NHS choir that beat Bieber to Christmas No 1