Hollywood Today: Two Image Award Noms for The Least Among You

Written and directed by first-time feature director Young, the message film was inspired when he sat mesmerized as the real life ‘Richard Kelly’ (Rev. Dr. Charles Marks) gave a stirring speech about overcoming racism on the heels of the LA riots in 1993. Deeply moved, he set out to make The Least Among You, which first aired on Showtime in June 2011. 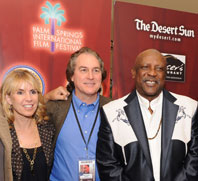 The film tells the story of the 1965 Watts riots arrest that forces Richard Kelly (Cedric Sanders) to serve probation at an all-white seminary. Although encouraged to break racial boundaries by its president Alan Beckett (William Devane), the school wants black followers not leaders. Even former missionary, Kate Allison (Lauren Holly), initially rejects Richard. A prison sentence looming, Richard meets Samuel (Louis Gossett, Jr.) — “the gardener in the basement.” As Samuel guides Richard through his many trials, Richard must choose between his dreams and his destiny.

Young says, “It’s really important that such a prestigious organization as the NAACP supports and recognizes independent, lower budget films like LEAST. It’s a real honor for us.”

Gossett, Jr. himself comments, “The good intention of the script spilled over to the crew. The amazing message of making a positive difference on someone inspired all of us.”After a chance meeting while walking their dogs in 1995, British producer Julia Verdin (Merchant of Venice) began collaborating with Young on The Least Among You. Verdin, founder of Rough Diamond Productions says, “ I was at a time when I had decided that I really want to start making films with a good messages to them so when Mark pitched me his script I loved the themes in it -It is a beautiful story of mentorship, and finding one’s own personal faith, which I feel is becoming lost in today’s society.

We are thrilled by the NAACP nod of appreciation for the film and Lou Gossett, Jr. nomination too – When I first read the script- Lou was the first actor who cam into my head- he brought such wonderful energy to this project both in his performance and off set – He gave such commitment to this role which makes his performance shine. He was also an absolute joy to work with and often acted as a mentor to the other young actors which was wonderful to see.

Win or lose, Young just wants the film’s message to live on. He says, “I just hope people young and old can appreciate the narrative and take away their message – everyone has a unique reason for being on this earth, and it’s a treasure worth fighting for.”

The Least Among You

Young began as an advertising executive in New York City, working for ad agencies Young & Rubicam and SSC&B on a variety of accounts. He later developed marketing campaigns for Pepsi Cola International, including the international Clio award winning “Pepsi is Today,” plus other campaigns featuring Michael Jackson, Tina Turner and Madonna before becoming a indie filmmaker.

Young’s latest project is the novel and screenplay Sun Bear – the true story of a 16-year-old Navajo orphan who spied behind Nazi lines, survived Dachau Concentration Camp and became a famous painter and healer. Verdin also has Two Jacks, starring Sienna Miller, Danny Huston and Jack Huston in post-production. She also executive produced Born of War, directed by Vicky Jewson, which just wrapped shooting in UK. In the works isCindy In Iraq, directed by Eva Gardos about a single-mother who takes on a job as a civilian truck driver in Iraq.

World Film Festival: Danny Huston and his nephew Jack at the MWFF for Two Jacks